Don't You Give Me No Sass!

So I had this idea, to do a Powell's books/coffee drinkers photo.  It would have books in the background, and a cup of coffee with a splash of cream.

Lady in my tea water

First I started with just water, to get the timing figured out and ready to switch to coffee.  Milk proved to have its own unique challenges.  For one, milk is a thicker density than water.  I got a lot of "blobby" drops, that looked like all sorts of creatures, for instance, like the white monster from the old cartoon, Scooby Doo (and did you know that the name "Scooby-Doo" comes from the last line of the Frank Sinatra song "Strangers In The Night?").

I also had a lot of lighting challenges with white porcelain, getting it lit evenly.  I ended up with two flashes for the background and hand holding one flash above the camera, to reduce shadows.  I also had to keep cleaning the sides of the cup.  Four hours later, I got a few drops I was happy with.  I did only small enhancements in Photoshop, besides adding the text.

I changed out the cups of coffee frequently, to keep the dark, rich brown color, as the cream kept diluting it to a caramel color.  I made 12 cups of coffee, drank one and photographed the rest!

I moved on to other projects after that, as I am getting new photos ready for the galleries.  So ten hours later, I called it quits, with quite a few images to upload the next day.  More on that, on the next blog. 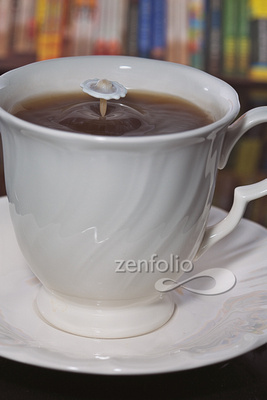