The birth of a new series 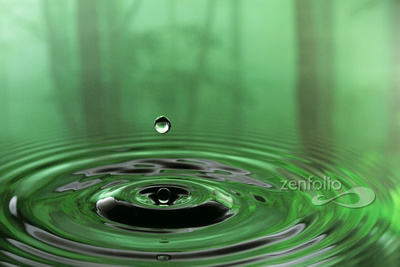 From the Trees of Tranquility series

Last weekend, I spent some quality time with my water drops, trying to get one last photo for my "Life in the Pacific NW" series.  So I'm sitting in my darkroom, with all the lights off, except for one small red light and the glow from my iPod, that has my music on it, and pondering what to do.  I was working on the last photo in the series, which was going to be Camas, WA based.  I did get photos, but was not quite satisfied with how they turned out.  I'll probably revisit them later.  I knew I wanted to redo a photo I had done last month, that I loved the background, but felt a different drop shape would look better.  I wanted to convey serene, tranquility and peacefulness.

So I re-shot to get that photo, with a different, rounder drop shape. The result is the photo shown here.  It took just over 60 photos.  The funny thing about this background, is with the straight lines of the trees, I can't have the music up too loud or even vibrations from the tv in the next room, or heavy footsteps.  It makes very, very tiny movements in the water, which makes for wavy, Dr. Suess trees!  So I wait a little longer in between photos until I can see the reflection is absolutely still.  I was able to get the shot I wanted, so I started thinking about more backgrounds, with simple clean subjects.  All the trees are blossoming pink and white right now, so I moved on to that background.  From that, the new series just evolved, I kept finding backgrounds of trees that I liked.  Hence, the new series I've started, titled "Trees of Tranquility."